Back to Blog Home

When you hear the phrase "World Cup," what do you think of? We are sure you think soccer, better known around the world as football, FIFA, international competition and raving fans. When Reactive hears 'World Cup," the sound is illegal streams, expensive bandwidth, and internet pirating that creates usage bills that no company wants to pay.

Since the World Cup started on November 20, Reactive has seen an increased number of fake accounts created by hackers to run illegal live streams of world cup games in hopes of gaining significant traffic that they can monetize. While we have had tons of fun having engineering solutions that protect our software from these fraudulent streams, something remarkable has come out of this experience. We learned in real-time just how strong our proprietary technology is.

During the first weekend of the sporting event, Reactive watched as multiple fake accounts and even more fraudulent streams went onto the internet to offer free online viewing of various games. One of those streams had over 1.5 million viewers concurrently watching the stream. As you can see from the image below, our peak load had a combined 3.3 million requests per minute (RPM).

For context, during this period, the hourly metrics with regard to what our engineering upheld were amazing. In just a single hour, Reactive streams processed 312 million requests and 41 terabytes of data. 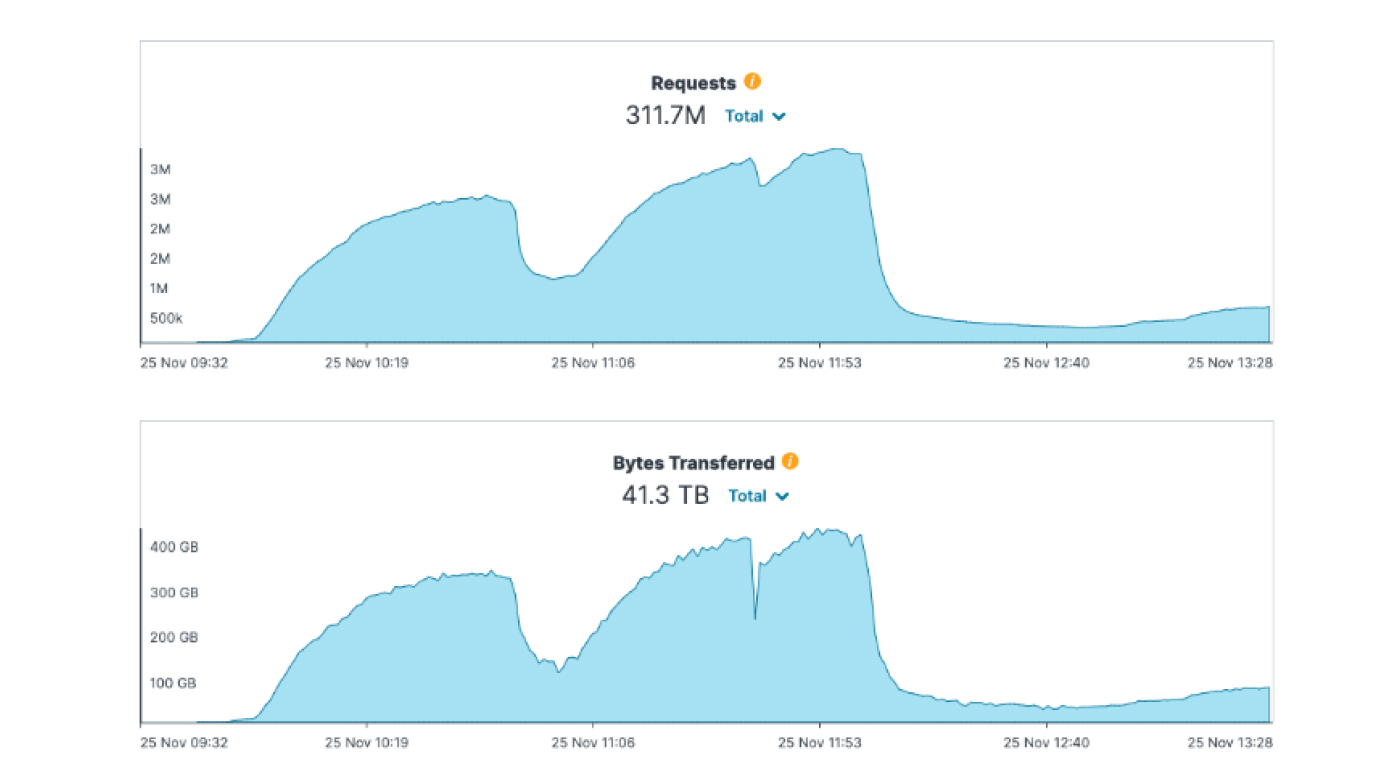 The comparison of load between applications in some ways is relative, but nonetheless, it's an aspect of software that every engineer deals with, especially as they try to scale users. We found an interesting comparison thanks to the Twitter account for Shopify Engineering.

As the market leader for e-commerce platforms, with approximately 4 million websites built using its software, it is safe to assume that Black Friday is a ridiculously busy time for the Shopify engineering team. People are scrambling for holiday shopping deals across the internet, so the infrastructure has to withstand a rapidly accelerated number of requests. That amount peaked at 75.98 million requests per minute. Reactive comparatively processed 1/25th of that load at 3.3 million requests per minute. Shopify has thousands of engineers on staff and earned over $4.6 billion in revenue in 2021. Reactive has two engineers and does a little less revenue. We are over the moon about how strong our software is.

As funny as it sounds, these unapproved streams have helped Reactive validate just how low the latency of our live-streaming technology is. It's why we built Reactive to begin with. The goal was to create a live streaming experience that was enjoyable for viewers and responsive for companies so that the selling of products and goods would be not just enjoyable but simple. Selling something to anyone is difficult. Our live selling software makes it easier and ensures that technology and a poor user experience won't be the reasons a consumer doesn't buy something during your live selling event.

If you are interested in bringing a live selling experience to your website, check out Reactive. Start your free trial now, or contact sales@reactive.live to request a live demo.